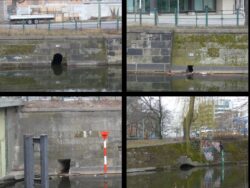 When you flush a toilet anywhere in central Berlin during a moderate-to-heavy rainstorm, much of the waste goes directly into the Spree river that runs through the city, or into one of its several canals. This happens on 30 to 40 days each year, sometimes as many as 60. This post is a documentation of just a few of the 120-odd outlets where the untreated sewage enters the waterways. END_OF_DOCUMENT_TOKEN_TO_BE_REPLACED

Second in the EYAWTKA series. This post is an annotated and tightly edited list of resources on green infrastructure for managing stormwater, water pollution and urban climate adaptation that I don’t think you can find all in one place anywhere else. It began just as some reminders to myself and then I figured maybe others might find it useful. It’s far from comprehensive but it is highly selective – for every link here, many less optimal ones were weeded out.  Specialists may want to skip to the BMP tools and databases farther down.

Green infrastructure is a set of methods for cities to prevent flooding and water pollution by incorporating nature in built structures instead of fighting it by just building ever bigger structures with ever more concrete. It’s a subset of what is often called nature-based solutions, best management practices (BPM) or low-impact development(LID). These terms aren’t identical but they overlap considerably, and further, they don’t have standardized definitions, although green infrastructure itself arguably has a more specific and distinct definition than the others. That being said, green infrastructure has an entirely different meaning in the US than it does in Europe, where it refers to any and all parts of the landscape that are not built – forests, parks, meadows, gardens, lawns, everything. In the US it means built structures that use natural processes.

END_OF_DOCUMENT_TOKEN_TO_BE_REPLACED

To say that Berlin is lavishly endowed with public space that is manifestly unused despite being paved is an understatement. I’m pretty sure Berlin has higher proportion of unused paved space than any other major city. (If you can think of one, let me know in the comments.) I am not talking about parking lots, plazas that are actually used, any areas with significant foot traffic, or vacant lots suitable for buildings. I mean inexplicable empty stretches along buildings and at streetcorners that aren’t used by pedestrians; sidewalks extravagantly and desolately out of proportion to their foot-traffic load; and large traffic islands and medians. END_OF_DOCUMENT_TOKEN_TO_BE_REPLACED

END_OF_DOCUMENT_TOKEN_TO_BE_REPLACED

From 2010 to 2015, over 100 engaging and innovative land-art installations in Indianapolis raised public awareness of river ecology and water infrastructure. But the once-prestigious museum behind them has since pivoted to crass marketing gimmicks – yoga, craft beer – and the “greatest travesty in the art world in 2017”.

There’s a famous story by Borges about a map that’s so detailed, it’s as big as the territory it describes. A few years ago, the artist Mary Miss made something very similar with oversized map pins installed around Indianapolis as a way to build thoughtful and meaningful connections between its residents and their rivers, streams, lakes and wetlands.

It was actually two projects, FLOW – Can You See The River? (2011) and StreamLines (2015). They consisted of over 100 giant map pins with bright red basketball-size pinheads placed throughout the city to mark various features of the local urban waterways such as small dams and sewer outlets. Further, every site had an ingenious interactive installation that not only provided multimedia information about the water features, but also physically engaged the viewers by involving bodily movement and play. A world’s-first phone app called Track a Raindrop provided user-friendly visualizations of how stormwater travels through the city infrastructure.

END_OF_DOCUMENT_TOKEN_TO_BE_REPLACED

Previously I wrote about Germany’s abundant and well-funded industrial heritage sites where disused rust-belt facilities are repurposed into multi-use parks with landscaping, nature, culture and recreation coexisting among the dramatic metal and concrete relics. Here I will cover more of the remarkable architecture both new and old.

In many sites striking new pedestrian / bike bridges connect public spaces that are separated by roads, rivers and other obstacles. They help make up for the country’s otherwise abysmal modern architecture which stands in sad and ugly contrast to the rich variety of fresh and exciting buildings in pretty much every other western European country.

The first one is a unique type of drawbridge in Duisburg that stretches up to lets boats pass, without opening as such, like one of those stretchy watchbands made of metal links, or a cat’s back, which has earned it the nickname “cat’s-hump”.

END_OF_DOCUMENT_TOKEN_TO_BE_REPLACED

Lately I have been discovering Germany’s many extraordinary Industriekultur and Industrienatur sites, which are decommissioned rust-belt industrial facilities repurposed into hybrids of historical monument, recreation park and nature reserve. The sites are cleaned up, the enormous concrete and rusting metal structures largely left in place, the buildings – including numerous architectural landmarks – restored, and the grounds are partly landscaped with ultramodern design and partly allowed to be re-greened by nature running its course.

The buildings are renovated into diverse combinations of arts venues, recreational facilities or opened for tours. But the most striking features are outdoors where the industrial and the natural are interwoven.

I cannot get over how much of this stuff there is and how well-funded it is. There are hundreds of these sites throughout Germany; the greatest concentration is the Ruhr region, Germany’s rust belt. They are linked by bike paths and region-wide sequences of green spaces as well as extensive networks of regional culture agencies providing a vast assortment of Industrieroute planners, maps and guides.

One site that has gotten attention in the US is Landscape Park Duisburg-North, which the New York Times calls “the quintessential park of the 21st century”, its “nightmarish hulks… almost mythic in their lurid grandeur”.