To say that Berlin is lavishly endowed with public space that is manifestly unused despite being paved is an understatement. I’m pretty sure Berlin has higher proportion of unused paved space than any other major city. (If you can think of one, let me know in the comments.) I am not talking about parking lots, plazas that are actually used, any areas with significant foot traffic, or vacant lots suitable for buildings. I mean inexplicable empty stretches along buildings and at streetcorners that aren’t used by pedestrians; sidewalks extravagantly and desolately out of proportion to their foot-traffic load; and large traffic islands and medians.

This post contains pictures I’ve been taking of these spaces, to show how they could be used – but aren’t – for plantings or micro-gardens or, preferablly, specially engineered raingardens, which many cities in the U.S. and elsewhere – but not Germany – have been installing for decades to collect rainwater from the nearby pavement and let it sink into the soil instead of overloading the sewer system and polluting the waterways.

Raingardens, also known as bioswales, are much more than planting strips, flower beds or sidewalk tree pits. There’s a lot going at the curb level and underground to get the stormwater to infiltrate downwards, but it’s invisible to the casual observer. For example: 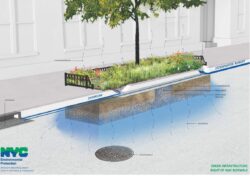 Raingardens are one type of green infrastructure or nature-based solution, a somewhat clunky but more apposite term. They are cheaper than the traditional “grey” infrastructure for reducing the stormwater overflows such as retention basins and sewage plants. They have additional benefits such as mitigating urban heat islands and increasing green space and quality of life, and as the climate crisis exacerbates the problems of stormwater overflows and hotter cities, they’re becoming even more necessary.

If Milwaukee can do it, then why not Berlin?

My inspiration for this post was the discrepancy between the near total absence of raingardens in Berlin and their adoption in many other cities over the last decade or two, along with a few eyebrow-raising events I have attended here recently where the resistance to raingardens was remarkable. They’re cheaper, greener, and more climate-friendly than the alternatives and in other countries, support for them has been booming for a long time.

So why is Berlin resisting them? How can a self-declared world eco-capital be lagging a full 30 years behind its ostensible peers in stormwater management and ten-plus years behind many conservative U.S. cities that have never had “green” reputations?

For example, I attended a panel discussion on the topic where the Berlin engineer who claims to have invented raingardens – despite the fact that many had been built in other countries since before he got involved -, and to be a world-class expert on the topic, and is the one most often quoted in the press, wasn’t even aware that thousands of them have built in the existing city fabric in cities around the world. The term for this is retrofits and he was skeptical that retrofit green infrastructure is even possible at all. He thought they’re only for new construction on unbuilt green space. “If that exists, I’d like to see it” were his words. (A Google search will find scores of such cities in two seconds.)

Or the time an official from the Department of Environment, Transport and Climate Protection gave a lecture on Berlin’s raingarden program which the city considers to be a global leader. She had exactly one example to show of a raingarden that’s been built so far. It was from 1997. (New York City has built 4,000 since 2013 and has 5,000 more under construction.) When she went on to describe a flagship project currently being planned, the audience of engineers and urban planners erupted in laughter at its implausibility.

Or the panel discussion at the Berlin city council on “usage conflicts” in planning raingardens, where the topic was how green infrastructure pits stakeholders against each another due to their conflicting demands for the ostensibly scarce available space. This was surprising because the cities that already have raingardens in abundance have only a fraction of the available space that Berlin has, yet they manage to fit them in.

It was curious to see the city focusing on potential conflicts that may or may not arise from green infrastructure when only a miniscule fraction of the administration, public and politicians have even heard of it. According to a member of the Berlin city parliament (the city has a parliament system), at most “a couple” of its 147 members are aware or interested enough to get involved with the topic. The speaker for environment of the Green Party, which is a leading party in Berlin and important in city politics, has no prior experience at all in stormwater or in fact any environmental field at all; the same is true for Berlin’s largest party, the Social Demoracts.

Or yet another panel discussion, where a prominent landscape architect dismissed an audience question about the differences between Berlin and the cities that have green infrastructure programs with a smirk and a blanket claim that what the other cities are doing – the many thousands of raingardens around the world – is “mostly just hype”. At which point the audience turned their heads to the questioner and tut-tutted over the impertinence of questioning Berlin’s supremacy.

Without question, the Berlin has room for thousands of raingardens without affecting foot or bike traffic, but the hurdles go beyond worries about space. City agencies – all of them, not just environmental – paralyzed by decades of scorched-earth austerity policy, gutting of the personnel ranks, and crippling cuts to public services that would make Republicans envious, lack the funds and personnel to take action. The result is a hot-potato game of buck-passing. In German it’s called Beamten-Mikado, “civil servant pick-up sticks” – whoever moves, loses – but Berliners celebrate it as a principled resistance to – well, no one knows what, exactly. (I won’t get into it here but Berliners are known for taking a perverse pride in having Germany’s most broken, dysfunctional, least-educated, unhealthy and crime-ridden city, and the one with the weakest economy, because in their view, things that function aren’t “cool”. This is a well-known phenomenon in Germany and something of an ongoing object of mockery and Schadenfreude by the rest of the country.) And so, motivated by my curiosity about whether space really is scarce enough to provoke “usage conflicts”, I began to document it.

Here are raingardens in New York City and Syracuse. Notice how they fit into fairly constrained spaces on the sidewalks. You can find these in dozens of cities around the world.

Now here are typical Berlin streetscapes that I marked to show the unused space that could be at least partially greened, with no impact to speak of on foot or bike traffic or public recreation.

The markings are conservative in that they still allow for broad pedestrian and bicycle lanes that are considerably roomier than average for foot- and bike-friendly cities, although in many cases those lie outside the picture. Trust me, these spaces really are not used, because there is so much other room for plazas and cafes and protests and markets that isn’t even in the pictures. If you look closely you’ll notice one or two exceptions have been made for public squares per se that are punishingly ugly and patently unused. The pre-eminent example of this is the abandoned plan for a Citizens’ Forum (Bürgerforum) next to the parliament building, which gets a whole post of its own here (German coverage here).

Here are further examples where I haven’t added the markings (because it’s time-consuming). The areas with grass could be rebuilt to accept stormwater runoff from the pavement and planted with mixtures of pollinator-friendly species, most likely natives.

Even in the U.S., which is not normally considered an environmental leader, dozens – probably hundreds – of municipalities are incorporating green infrastructure into their programs for climate-oriented stormwater management and combined-sewer overflow reductions, which in many cities around Berlin’s size are costing $1 billion to $5 billion. In New York, where I worked in this field, the raingarden program was first announced in 2010; by 2019, 4,000 of them had been built and 5,000 more were under construction. The city stopped commissioning new grey stormwater infrastructure altogether as part of the 2010 plan. From that date onwards only green infrastructure and grey projects that were already in the pipeline are to be built.

Yet New York has only a small fraction of the available space that Berlin enjoys, proportionally speaking, and the population density is much higher and the diversity of people and cultures wider and more disparate. “Usage conflicts” would surely be more likely in crowded and heterogeneous New York than in Berlin with its ample elbow room and far more homogeneous population, yet they haven’t been a significant obstacle in New York. And so, given that Berlin has near zero political support for green stormwater infrastructure to speak of and only scant traces of  technical know-how in the responsible agencies*, warning people about conflicts that may or may not ever arise doesn’t seem like a promising way to get people on board with the idea. Or if people are worried about them, why not talk to people who have already gone through the whole process? So far there aren’t any signs of interest in how the challenges have been addressed elsewhere, where people have moved on and gotten down to the business of modern-day water management. Without open minds and willingness to learn, the odds of significant progress are not good.

*Berlin does have a green infrastructure program but only for new developments that pave over open unbuilt land – this at a time when Germany is paving over green space at the rate of 120 football fields per day. Of course, such a program doesn’t improve anything whatsoever – it only prevents the paving mania from adding to the existing polluted stormwater runoff. It doesn’t reduce pollution at all.