A much shorter post than usual – just a quick note to say that yesterday I had the good fortune to experience the tree that smells like cake, which is something few people ever encounter, and in fact for many it’s physically impossible. The tree, called katsura in English and Japanese – its native habitat is Japan and China -, releases the scent for just a couple of weeks in the fall, and although the species is not rare it is uncommon, being used occasionally in parks and gardens. But many people are unable to detect the scent, for genetic reasons, so a lot of factors have to fall into place in order for the extraordinary scent to be experienced.

The leaves smell distinctly like cake – some say caramel or cotton candy – and indeed the German word for it, Kuchenbaum, translates as caketree . Scientifically, it’s Cercidiphyllum japonicum. The scent is due to maltol, a compound also present in breads, warmed butter, uncured smoked pork, chicory, milk, cocoa, coffee and roasted malt. I saw it on October 31 and I believe this was towards the end of the scent-releasing period.

Finding a katsura may be easier than you think, because a great many cities now have interactive maps of all their street trees where you can search for whatever species you want to find. Just search the internet for  “urban forest map” and the name of your city, or check the (very incomplete) lists here and here. You’re out of luck if you’re in Berlin, though. In theory Berlin has an online tree map but, bizarrely, it doesn’t have a way to simply search for a species and see it on the map. 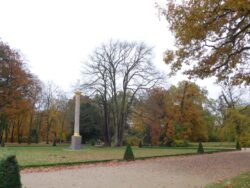 Berlin’s map is for pros, New York City’s is for the masses.

I have noticed the online tree maps from the Berlin and New York City parks departments are very different and decided to compare them. Both cities have mapped their street trees and made interactive maps and data publicly available but they have interesting differences.

END_OF_DOCUMENT_TOKEN_TO_BE_REPLACED

Just a few words about a fascinating little corner of the arboriculture world known as tree shaping or arborisculpture, the training of living trees into sculptures, furniture, buildings and other structures. Tree shaping has seldom implemented although the principle is the same as the far more common practice of espalier, which is a tree or shrub trained to grow flat against a frame or wall in a garden, often for increasing fruit production. Tree shaping has little practical application but it is nonetheless interesting as a creative expression of the wonder, strength and beauty of trees and how humans can engage with them and the broader natural world.

The field’s greatest visionary was Arthur Wiechula (German, 1867 – 1941) who envisioned growing entire buildings and researched the physiology of the necessary grafting.

Smaller works such as chairs and individual sculpted trees are documented since at least the 19th century, with Germany perhaps the chief center of activity, followed by the UK and US. Germany has most of the world’s living buildings – a couple of churches and a four story pavilion built with the aid of metal scaffold. India, however, has largest, oldest and most functional living structures. In the state of Meghalaya are footbridges, formed of living roots of Ficus trees, that reportedly are centuries old and able to support 50 people.

END_OF_DOCUMENT_TOKEN_TO_BE_REPLACED

This blog is about environmental and public space topics on which little, if any, information is available in English. Most of it is about Germany, where I live. It’s more about important things that the English-speaking world has no other way to learn about, than about my own work per se. The are digressions into design and architecture and a few exceptions to the not-previously-in-English rule. I am an urban ecologist with a Ph.D. (German equivalent: Doktorat) in forest ecology. My recreational blog is here and a brief bio is here.